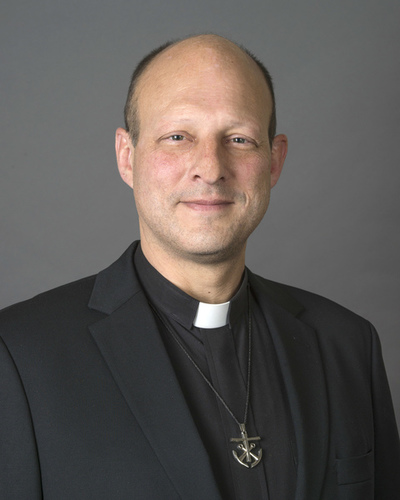 Father David J. Scheidler, C.S.C., is the second oldest of eight children in a bilingual, bicultural family, since his mother was a native of Mexico City.  He was born in Dallas, Texas but was raised in Indianapolis, Indiana where he graduated from Cathedral High School in 1983.  He then attended the University of Notre Dame and spent his sophomore year in Innsbruck, Austria.  In 1987 he graduated from Notre Dame with a Bachelor of Arts degree with double-majors in History and Communications & Theater.  After working a year in Manhattan for Lord & Taylor, he entered Moreau Seminary, receiving his Master of Divinity in 1993 and Ordination to the priesthood in 1994.

His first assignment was for two years at a parish in Goodyear, Arizona before going to work at Notre Dame in 1995.  While serving as rector of St. Edward’s Hall, he was also the associate rector of the Basilica of the Sacred Heart and assisted in Campus ministry with various programs, including the Freshman Retreat and Spanish Mass.  He also served as the chaplain of the Notre Dame Folk Choir and accompanied them on many tours.  In 2002-2003 he was a chaplain for the Alliance for Catholic Education.

From 2003-2007 he was assigned to Notre Dame College Preparatory in Niles, Illinois, where he was the Director of Campus Ministry and a religion teacher.  Next he was the associate pastor on the parish team of St. Adalbert and St. Casimir in South Bend.  From 2010 to 2013 he served in Monterrey, Mexico, in various capacities.

Before being assigned as the pastor of Sacred Heart Parish in Notre Dame, Indiana, he served as the Associate Rector of the Basilica again from 2013-2017, and helped with other projects in Campus Ministry.  He continues to live in residence among the women of Farley Hall.  He is the proud uncle of 22 nieces and 22 nephews.