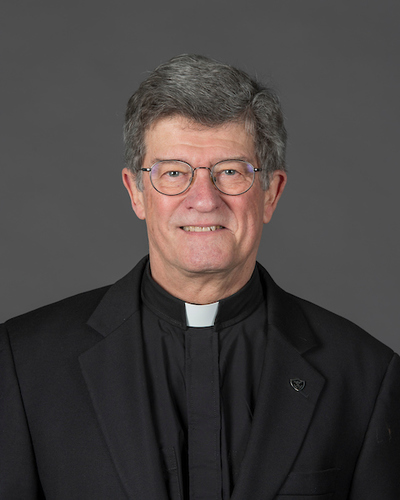 Director of Healthcare and Wellness for the United States Province

Rev. Richard (Fr. Rick) Wilkinson, C.S.C., grew up in the White Mountains of New Hampshire.  He earned a Bachelor’s degree in Political Science from the University of New Hampshire.  He joined the Congregation of Holy Cross in 1973.  As a Holy Cross seminarian he spent a year serving in Dhaka, Bangladesh, with the Mother Teresa Sisters.  He earned a Masters of Divinity degree at the University of Notre Dame in 1978.  After his ordination in 1979, Fr. Rick served in Bedford Stuyvesant, New York City.  He then headed to Santiago, Chile, for six years. Upon his return to the USA he served on the formation staffs at the Holy Cross Novitiate in Waterford, New York, Moreau Seminary at Notre Dame, Indiana, and the Holy Cross Novitiate in Cascade, Colorado.  From 1998 to 2012 he was Director of Campus Ministry at St. Edward’s University in Austin, Texas.  From 2012  to 2018 Fr. Rick was Provincial Vicar and Assistant Provincial of the United States Province of Holy Cross Priests and Brothers.  In 2018 he was appointed Director of Healthcare and Wellness for the United States Province of Holy Cross.