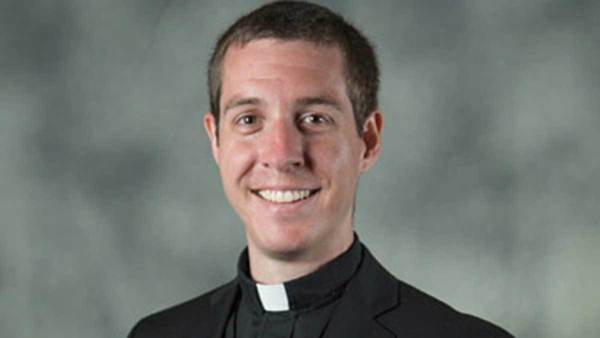 University of Notre Dame alumnus Rev. Stephen “Chase” Pepper, C.S.C., has been selected for the prestigious Gates Cambridge Scholarship to pursue a full-time postgraduate degree at the University of Cambridge in England.

Father Pepper is one of 35 winners of the award from across the United States, representing 39 universities and 19 States.

Established by a $210 million gift from the Bill and Melinda Gates Foundation, the Gates Cambridge Scholarship recognizes students from outside the United Kingdom who demonstrate outstanding intellectual ability, leadership potential and a commitment to improving the lives of others.

The award covers tuition, a maintenance allowance for a single student, airfare at the beginning and end of the course, inbound visa costs, health care costs and other related costs on a discretionary basis.

Father Pepper, who received his Master of Divinity from Notre Dame in 2014, plans to pursue a doctorate in theology and religious studies at Cambridge.

A native of Huntsville, Alabama, Father Pepper is a graduate of Seton Hall University, where he earned a degree in political science before working with the Fellowship of Catholic University Students at Temple University in Philadelphia.

He entered the Congregation of Holy Cross in 2009 and was ordained to the priesthood in 2015. He spent the past three years in the departments of Campus Ministry, Residence Life and Theology at King’s College in Wilkes-Barre, Pennsylvania. He currently is in-residence in Dillon Hall.

Father Pepper’s research at Cambridge will focus on “the intersection of systematic theology and Dante studies,” a subject that has fascinated him for many years, from his experience in seminary to his time at King’s College, where in addition to teaching he volunteered at the local prison in northeastern Pennsylvania.

“My passion for Dante developed during my first year of seminary at Notre Dame in an Old Testament course with (Hesburgh Professor of Catholic Theology) Gary Anderson, who encouraged me to compare the liturgical geography of Dante’s afterlife in the ‘Comedy’ with the tabernacle and temple narratives that we were studying in his course,” Father Pepper said.

“The project triggered something in me,” he said, “and I continued from there to explore the theological underpinnings and consequences of Dante’s thought with faculty across the Department of Theology, a momentum which culminated in a synthesis seminar project for the Master of Divinity on the role of guide figures in the ‘Comedy’ for a theology and a model of pastoral mentorship relationships.”

Eventually, a single question came to animate his research: “How might people in life situations of ‘exile’ have access to theology and literature itself conceived out of exile?” From there, “I began to see how Dante could be used to explore the fundamental structures of and possibilities for human unity,” he said, “even in the midst of fragmentation and isolation.”

Pepper thanked a number of individuals and entities for helping him to reach this point in his journey, including: Notre Dame faculty Rev. Kevin Grove, C.S.C., a former Gates Cambridge Scholar, John Cavadini, Zygmunt Baranski and Christian Moevs; Vittorio Montemaggi, lecturer in religion and the arts at King’s College London and former professor of literature and religion at Notre Dame; Jeffrey Thibert and the Flatley Center for Undergraduate Scholarly Engagement at Notre Dame; the Notre Dame Gates faculty and alumni network; the Congregation of Holy Cross, especially Rev. David Tyson, C.S.C., and Rev. Austin Collins, C.S.C.; and his parents, Lorrie and Barry Pepper.

“Chase Pepper exemplifies the synthesis we strive to form in our Master of Divinity students: a top intellectual leader with a truly pastoral vision,” said Timothy Matovina, chair of the Department of Theology at Notre Dame.

He continued, “Father Chase’s theological research involves rigorous exploration of Dante Alighieri’s works, as well as their enduring illumination for reading groups of incarcerated prisoners, students in college classrooms, and lecture halls of those on spiritual pilgrimage. His work brings hope for all who deeply consider paradigms of exile, community and our earthly pilgrimage to God.”

Notre Dame senior Michael Foley, a physics and mathematics double major from St. Charles, Illinois, also was selected for the award this year. A Glynn Family Honors Scholar, Foley declined the offer and will pursue a master’s degree and Ph.D. in physics from Harvard University or the University of California Santa Cruz instead.

Students interested in learning more about the scholarship can visit cuse.nd.edu/gates.

Originally published by Erin Blasko at news.nd.edu on February 16, 2018.