While the celebrations of Final Vows are always a moving and joyful experience, Fr. John Herman, C.S.C., the Rector of Moreau Seminary, said that this year’s celebration was “extra special for us” in that it came on the Feast of Our Lady of Sorrows and the tenth anniversary of the Beatification of the founder of our Holy Cross community, Blessed Basile Moreau. 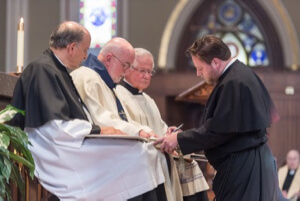 "It was a great blessing for our Moreau Seminary community and the wider Holy Cross community to celebrate the final vows of our brothers,” added Fr. Herman. “Through the intercession of Father Moreau and Our Lady of Sorrows, may other young men be moved by this final vows celebration and be open to discerning the possibility of a vocation as a Holy Cross priest or brother."

Following the Mass, there was a reception in the University’s Main Building for all who had come to the celebration. Later in the evening, there was a celebratory dinner for the Holy Cross community as well as the men’s families and closest friends.

Then, on Saturday, September 16, all three of the newly finally professed were ordained deacons by the Most Rev. Kevin C. Rhoades, Bishop of the Diocese of Fort Wayne-South Bend. The Diaconate Ordination was held in the Chapel of Moreau Seminary.

In his homily, Bishop Rhoades emphasized the call of deacons to the service of charity, and he encouraged the three men to imitate the humility of Jesus in their ministry.

Once again, there was a reception after the Mass to welcome and congratulate the newly ordained deacons.

Having already completed their theological studies, the three new deacons have been given fulltime ministry assignments for their deacon year. This ministry with the People of God will be the core of their final preparations to serve as priests.

Originally published on the Congregation of Holy Cross website.