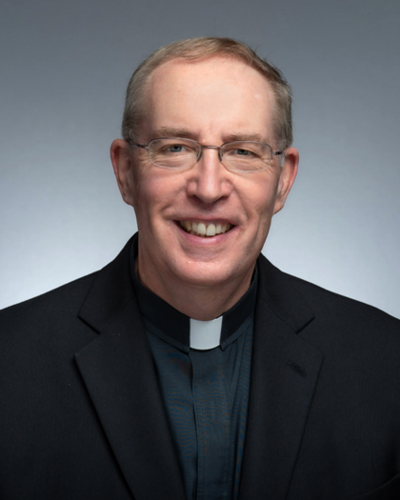 Rev. John Conley, C.S.C., was ordained a priest in the Congregation of Holy Cross in 1979.  He received both his B.A. in History and his Master of Theology degree from the University of Notre Dame.  He also received a Masters in Educational Administration degree from Loyola University of Chicago.  Father John served as teacher and assistant principal of Notre Dame College Prep in Niles, Illinois, as well as principal of Bourgade Catholic High School in Phoenix, Arizona. He was the Director of Vocations for the Indiana Province of the Congregation of Holy Cross and during that time lived in residence at Alumni Hall. In 1997 he became rector of Siegfried Hall at Notre Dame and served there for twenty-two years. Father John is currently the Pastor of Sacred Heart Parish, Notre Dame, Indiana. Father John also serves as General Archivist for the Congregation of Holy Cross and chaplain to the Notre Dame Hockey team and the Monogram Club.