We pray with the church, we pray in community and we pray in solitude. Prayer is our faith attending to the Lord, and in that faith we meet Him individually, yet we also stand in the company of others who know God as their Father.

–Constitutions of the Congregation of Holy Cross

Persistent Pioneer for Our Lady’s University

The University of Notre Dame was founded in late November 1842 by a priest of the Congregation of Holy Cross, Father Edward Sorin, C.S.C., and seven Holy Cross brothers. His original land grant of several hundred acres was the site of an early mission to Native Americans, but included only three small buildings in need of repair. Father Sorin nevertheless had a bold vision of a great American Catholic university in the tradition of the great medieval universities. This has inspired Notre Dame’s growth over its entire history. Father Sorin trusted in God’s providential aid for bold plans conceived in His service.

This gave Sorin and his community a perseverance that resisted great adversity—perseverance rooted in the knowledge that God brings the power of the resurrection forth from the suffering of the cross. Even after a disastrous fire in 1879 destroyed the Main Building, which housed virtually the entire University, Father Sorin willed Notre Dame to rebuild and continue its growth.

Throughout its history, Notre Dame has been led by men of many talents. Father John A. Zahm, C.S.C., a brilliant scholar who later accompanied former President Theodore Roosevelt on a South American expedition, became the builder of the science departments at Notre Dame and inspired the University's first flowerings in research. Zahm’s brother, Albert, was among the earliest and most influential pioneers of the aerodynamics of flying machines, and professor Jerome Green achieved the nation's first wireless transmission at Notre Dame.

Later, Father Julius A. Nieuwland, C.S.C., a beneficiary of the advanced education encouraged by Father Zahm, earned lasting fame as the discoverer of the formulae for synthetic rubber. Father James A. Burns, C.S.C., Notre Dame's great theorist of education, revolutionized the University in the 1920s. In eliminating the preparatory school and dramatically upgrading the Law School, in establishing the University's first meager endowment and a board of lay advisors to oversee it, Burns made it clear that Notre Dame was committed to nothing less than preeminence in American Catholic higher education.

Beginning in the 1930s the University was strengthened by an influx of distinguished European scholars fleeing the Nazis, and, drawing on their expertise, Father (later Cardinal) John A. O'Hara, C.S.C., significantly expanded the graduate school to include programs in biology, physics, philosophy and mathematics. 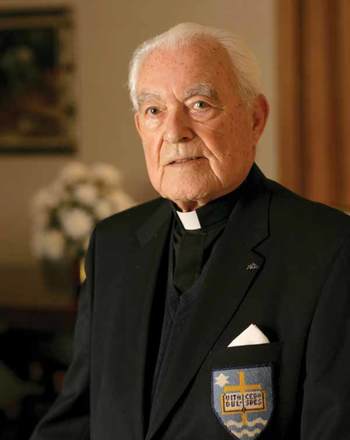 The explosive growth of the University - both in size and in stature - gained national prominence during the 35-year tenure of Father Theodore M. Hesburgh, C.S.C., who himself became an internationally known figure for his work in education, the Church, human rights and world affairs. The Hesburgh era saw Notre Dame's enrollment, faculty and degrees awarded all double; its library volumes increase five-fold; its endowment rise from less than $10 million to more than $400 million; its physical facilities grow from 48 to 88 buildings; its faculty compensation increase ten-fold and its research funding, more than twenty-fold. Two defining moments in Notre Dame's history occurred at Father Hesburgh’s direction: the transference of governance in 1967 from the Congregation of Holy Cross to a predominantly lay board of trustees and the admission of women to undergraduate studies in 1972.

Under the leadership of Father Edward A. Malloy, C.S.C., from 1987 to 2005, the University continued to grow in stature. Endowed faculty positions now number more than 200, the student body has become one of the 20 most selective in the nation (some 71 percent of entering freshmen rank among the top five percent of students in their high school graduating classes), and the endowment, at $5.5 billion, is among the top 20 in American higher education.

Also during the Malloy years, Notre Dame's minority student population nearly tripled, the presence of women at all levels in the University — students, faculty, staff and officers — expanded significantly, and a major effort in international outreach began.