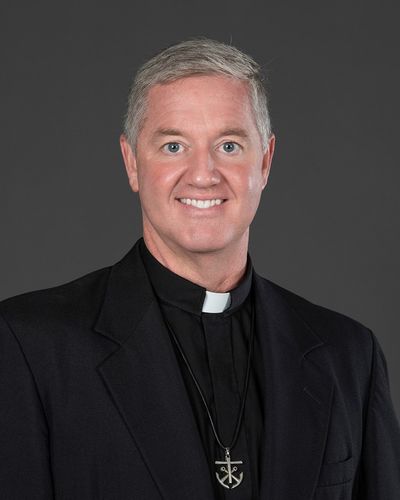 Fr. Tom Eckert, CSC, currently serves as the Director of the Holy Cross Mission Center overseeing the international missions for the Congregation of Holy Cross. Previously, he served for nine years as the pastor of St. John Vianney Catholic Church and School in Goodyear, AZ. He is a native of Huntington, Indiana, and is the youngest of fourteen children—yes, FOURTEEN—with ten older sisters and three older brothers, and his parents celebrated their 70th wedding anniversary in October 2020. Fr. Tom graduated from the University of Notre Dame in 1995, with a double major in Economics and Spanish. He entered the seminary for the Congregation of Holy Cross in 1995, received his Master of Divinity from Notre Dame in 2002, and was ordained to the priesthood in 2003. As a priest on campus, he completed his Masters in Spanish Literature in 2008. Before beginning his time as pastor, Fr. Tom worked at Notre Dame from 2003-2011 in various capacities, including Rector, Director of Latino Ministries, Assistant Vocation Director, and Spanish professor. Fr. Tom also serves as the in-residence priest for Johnson Family Hall.