“I just was very much attracted to, I think, priesthood and ministry initially because of the liturgy — and the music,” he says.

Years later, when he was asked if he would like to take over as rector of the Basilica of the Sacred Heart in 1997, Father Rocca thought about it for “a millionth of a second.”

“I said I think that would be really nice; I think I would love that,” Father Rocca said. “It seemed to be a match for my gifts and talents.” 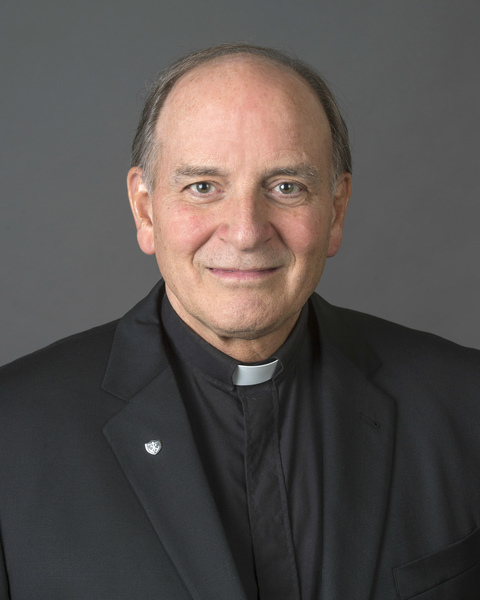 He certainly did love it. Nearly 23 years later, Father Rocca is stepping down from the job he was born to do, the culmination of his path through the priesthood to become an expert in liturgy, prayer, preaching and sacred music. He struggles to confine nearly a quarter century to a few highlights.

The Easter Vigil (every one for 22 years). Hearing confessions (“helping people know that God really loves them despite their sinfulness”). Baptisms (the Burbage family liked him so much he baptized every one of their nine kids).

Milestones (the 125th anniversary of the Basilica). Physical changes (the installation of the Murdy Family Organ, along with a new tile floor). Unforgettable Masses (Rev. Ted Hesburgh’s funeral and Rev. Basil Moreau’s beatification).

His success in organizing, with others’ assistance, so many sacred events follows a simple formula.

Rocca grew up in Arlington Heights, a northern suburb of Chicago and a Catholic enclave. He was the middle child of five Italian kids, four boys and a baby girl. His father, who was an accountant at the prestigious firm of Ernst & Ernst (now Ernst & Young), was the son of an emigrant from Italy to Wisconsin who worked as a ditch digger.

Rocca’s father was musical, sitting outside on the back porch at night strumming his guitar or listening to a transistor radio. His mother, who did not work outside the home, was fastidious.

“I think I probably got the attention to detail from her, and my love of music from my father,” Rocca says.

His parochial school classes featured Dominican nuns who taught 60 students each. They had to be tough, he says, but could also be nice and funny — especially the ones with Boston or Kentucky accents. His two older brothers went to Notre Dame High School, run by the Congregation of Holy Cross.

Several influences pushed him to consider the priesthood, he says, including his brothers’ school, the organ lessons from the nuns, and his parish priests. The final nudge was when a Holy Cross priest gave a vocational talk to his eighth-grade class and showed slides of the University campus.

“Ever since fourth grade, really, I’ve been thinking about priesthood, or religious life,” he says. “I really didn’t know what it was back in those days.”

In 1961, he entered the Holy Cross High School Seminary at Notre Dame, his first time on the campus that would be home for most of his life. After completing high school, he started to think more seriously about his lifelong choice during a novitiate year in Jordan, Minnesota.

The conditions in Jordan were rough: no television, radios or newspapers; intense silence and prayer; no leaving the property; and freezing cold for seven months. An extremely conservative novice master enforced the rules with vigor. His novice class winnowed from 55 to 21 before first vows.

“I always really knew this is what I wanted,” Rocca says. “But it was like, do we have to go through this stuff to get there?”

Returning to Moreau for college, Rocca says his class experienced whiplash. A liberal superior was making changes in line with Vatican II and the late 1960s culture. The seminarians, for instance, were expected for the first time to blend into classes at Notre Dame, wearing regular clothes instead of the clerical garb that had distinguished them. There was a reaction against the old ways of doing things, he says, but no consensus on how to replace those ways.

“It was one of those periods in Holy Cross when a lot of things were changing,” Rocca says. “And a number of goofy things were taking place. It was like playing pingpong. You were back and forth between real liberal or real conservative. We just kind of bonded together, our class, and we said we’re just going to hang in there.”

Daniel Jenky was a classmate and fellow history major whose friendship would continue to impact Rocca. While the stressful process created close bonds, he says formation is much different now.

Rocca was in college at Moreau Seminary when his father called one day and asked him to lunch. Surprised, he asked what his father was doing on campus. His father explained that he had audited the books for Notre Dame for years and also recruited students for the firm.

“We never knew he had anything to do with Notre Dame,” Rocca says. “I didn’t have a clue. He never talked about work at home. My dad was pretty successful, but he was very humble.”

The son didn’t turn out much different.

Rocca graduated from Notre Dame in 1970, took his final vows and was ordained a deacon. After receiving his master’s in theology three years later, he requested a parish in Austin, Texas, because his parents had moved to Dallas and his mother was in poor health.

He served for nearly five years in St. Ignatius Martyr Parish, where he was ordained in 1974. He traveled the 225 miles to Dallas to visit his parents often. His father died of a heart attack not long after his mother passed from emphysema.

“It was difficult,” he says of that time. “But I still love St. Ignatius. I go back every Christmas to visit people there.”

After having been discouraged from studying music as an undergraduate, Father Rocca went to graduate school for degrees in liturgical music and liturgical studies at Catholic University in Washington, D.C. He returned to Notre Dame in 1980 with assignments to help in formation and liturgy at Moreau Seminary. He still teaches classes on how to say Mass, how to be a deacon and related subjects.

“The ironic thing about that is I really didn’t get to know many students,” Rocca says. “I worked mostly with the directors. So that was 12 years. I always say it’s like one year for each apostle.”

While he enjoyed working with the Student Affairs staff, he says he missed working with students. He didn’t relish student discipline, although he recognized the importance of including a Holy Cross presence.

Father Jenky’s appointment as auxiliary bishop of Fort Wayne-South Bend in 1997 would create the opening for Father Rocca to move into his dream job. Rector of a church so important that Pope John Paul II in 1992 made it a minor basilica is a major endeavor.

The Basilica receives more than 100,000 visitors every year. The rector oversees a staff of tour guides who show off its many features — from the world’s largest collection of 19th-century French stained glass to the historic murals of Vatican painter Luigi Gregori — as well as a physical maintenance staff. He is in charge of scheduling Masses and celebrants and planning liturgies.

Football weekends are packed and chaotic, but Father Rocca sees each as an opportunity “to help these thousands of people experience a wonderful liturgy.”

“People are so grateful,” he says. “Whether Notre Dame wins or loses, they’ll say the Basilica Mass makes the football weekend worth it. That’s so heartwarming and touching to hear that.”

Father Rocca baptized the Burbage family’s first child, who is now in a seminary studying to be a priest, when Tim Burbage was in Notre Dame’s MBA program. The family has returned to campus from the Nashville, Tennessee, region for eight more baptisms with Father Rocca.

“The whole family was always impressed with the seriousness with which he approached the sacraments, and also how he made our non-Catholic family members feel welcomed,” Burbage says. “Over the years, we started to see him as an extension of our family.”

Father Rocca has continued to add to his duties over the years. Since 1984, he has served as the general editor of the Ordo for the Liturgy of the Hours and the Celebration of the Eucharist, published for every diocese in the United States by Paulist Press. He became the chaplain for cadets and midshipmen in the University’s large ROTC program in 2000.

He has also served as a consultant for the United States Conference of Catholic Bishops’ Committee on Divine Worship, which annually prepares the liturgical calendar for the United States. He is the director of liturgy for the U.S. Province of the Congregation of Holy Cross. A recent side project was the preparation of a brochure about the Basilica’s World War I Memorial Door with its famous “God, Country, Notre Dame” inscription.

Rev. Brian Ching, C.S.C., will become the new rector, but Father Rocca plans to continue all his other activities in “retirement.”

“Actually it just frees me up to do these jobs a little better,” Rocca says. “After almost 23 years, I think now is the time to pass the baton on. Father Brian will be an able and dedicated rector of the Basilica, who will nourish well the faith life of the Notre Dame community and beyond. As rector emeritus, I will be honored to assist Father Brian in whatever ways I am able.”

Produced by the Office of Public Affairs and Communications